We arrived at Ross Castle in the afternoon of the May 20th. We had just finished our tour of Muckross House so we opted out of a tour. No loss as there was so much going on outside. 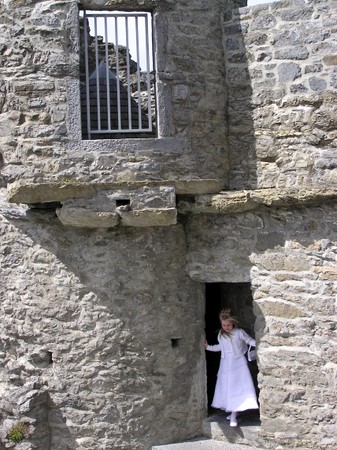 We assumed this young lass received her first communion that day. Her family, as well as a few other families, were wandering the grounds in their Sunday Best.

There was also a 10K race being run through Killarney that day.

Ross Castle is located here, on the edge of Lough Leane in County Kerry. It was built in the late 1400s by the O'Donoghues. This is an example of a typical stronghold built by Irish Chieftains in the middle ages.

There is a legend that O'Donoghue leaped or was sucked out of the window of the grand chamber at the top of the castle and disappeared into the waters of the lake along with his horse, his table and his library. It is said he now lives in a grand palace at the bottom of the lake where he keeps a close eye on everything that he sees. I imagine he doesn't see much down there.
Labels: Ireland 2007