Continuing our saga across Ireland we ended up here at the Staigue Fort in County Kerry. Staigue is from the Gaelic An Steig meaning the portion of land. 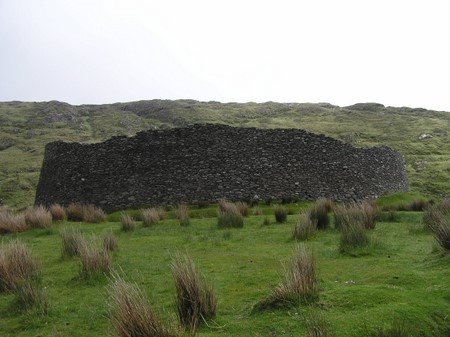 The following text is from a sign outside the fort.


This is one of the largest and finest stone forts in Ireland and was probably built in the early centuries before Christianity came to Ireland. It must have been the home of a very wealthy landowner of chieftain who had a great need for security.

A wall up to six meters high and four meters thick - built entirely without mortar - encloses an area thirty meters in diameter. Several near vertical masonry joints are visible in the wall, and these may indicate that the fort was built in stages rather than in one continuous operation. The fort was entered through a narrow lintel covered passage in the wall. 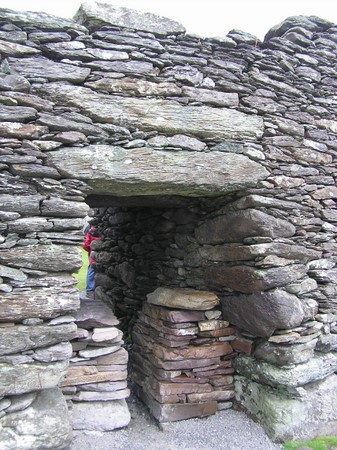 The modern stacked bricks help keep out the myriad sheep.

The fort was the home of the chieftain's family, guards and servants, and would have been full of houses, out-buildings, and possibly tents or other temporary structures. No buildings survive today, though two small chambers are contained within the walls. 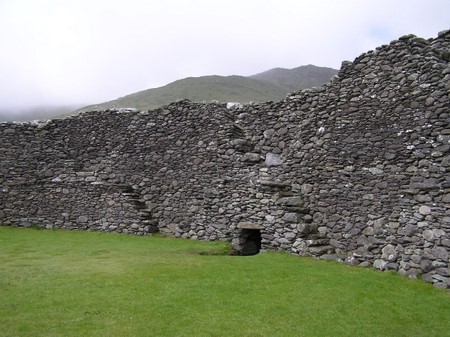 The top of the wall was reached by a series of steps which criss cross against the inside of the wall. An earthen bank and ditch around the fort gave further protection.
Labels: Ireland 2007