Wow, we're finally out of Dublin and heading into what I'll call "real Ireland". We headed north toward our first stop, the Newgrange Monument. Have I mentioned that their road system appears to have been laid out by drunken Irishmen? We asked for directions at a Subway restaurant but they didn't know. I am not sure they had heard of the Newgrange Monument. Along the way we saw this sign. 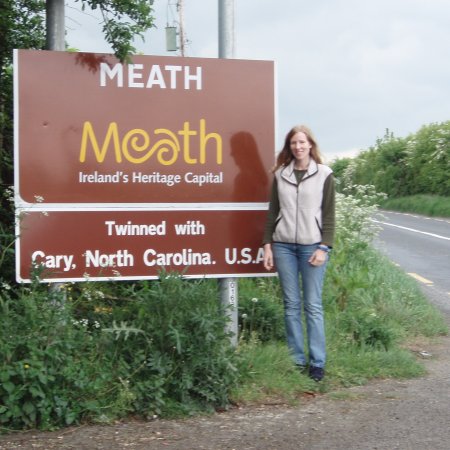 Since Brandy used to live in Cary, NC, we had to get a photo. We were still lost, but I had a feeling we were getting closer. We did find Newgrange but weren't allowed to stay. It is located here, but arriving there is not the correct way to visit. No, you have to get back in the car, drive many more kilometers, cross the river, drive some more, finally parking in the official parking lot. But we're not there, we're just about 5 km farther from the monument. Then you have to buy a ticket, walk across the bridge (across the same river!) then take a shuttle bus a few kilometers back to the stinkin' monument. Yikes! The rest of the trip better not be like this.

Well I must say the monument was pretty spectacular. It dates to about 3300-2900 BC. That makes it about 500 years older than the Egyptian pyramids. It also predates another quaint little pile of stones, known as Stonehenge, by about 1000 years. No one has been stacking stones like the Irish. 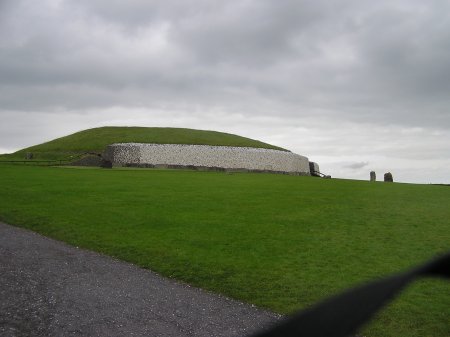 Yes, that is that is the camera strap. I could have cropped it out but I kind of like it.

The tour guides were fantastic. There is something about the Irish that leads to great story telling. It seems Newgrange was used for burial. Here is the entrance to the burial chamber showing the engraved kerbstones found around much of the monument grounds. 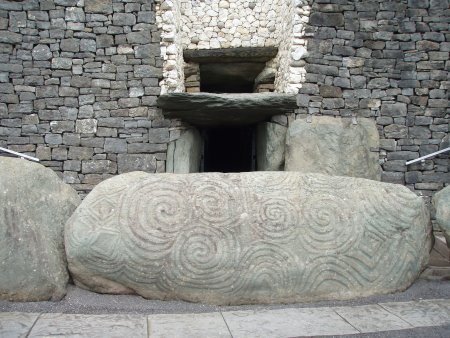 Once you squeeze inside you begin to notice all the graffiti spanning many 100s of years. The interior is not that large, when you consider how large the entire monument is. The ceiling is very high, but that doesn't relieve the feelings of claustrophobia. I had to creep sideways and squat down for about 20 feet of the hallway. The tour guide gave a great talk on the three burial chambers at the end off the hallway. She also spoke about how the entrance was designed by the pagans to align with the rising sun on the Winter Solstice. The excitement occurred when the lights were turned off and the room went BLACK. Then the lights were turned up slowly to simulate the rising sun. Pretty exciting stuff. Each year there is a lottery to decide who can go in the tomb before sunrise on the solstice and watch the sun as it rises and floods into the burial chamber.

Here Susan and Brandy squat in front of an engraved kerbstone. 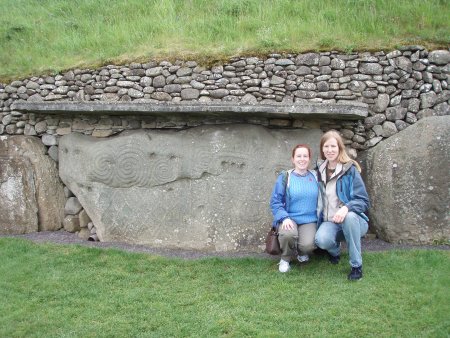 The views around Newgrange are spectacular. The grass is green and the sheep plentiful. 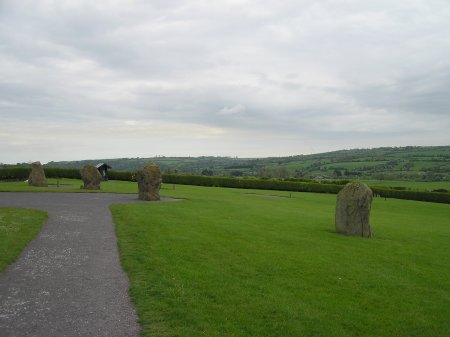 With full cameras and empty stomachs we head out to find dinner and our first Bed and Breakfast.
Labels: Ireland 2007